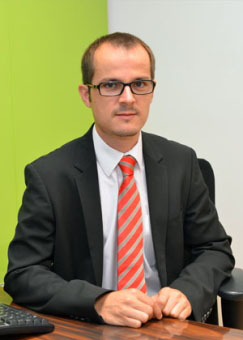 Jurij Redek completed his law degree in 2004 but had already performed certain duties at a law firm prior to his graduation. After completing his studies, he was recruited as a legal officer by an insurance company. He continued his career at the European Court in Luxembourg. Following his return to Slovenia, he worked as a trainee at the High Court of Ljubljana and was subsequently engaged in performing the most advanced legal duties in a large company, with an emphasis on public procurement law.

He covers the following types of law in particular:

He speaks Slovenian, English, Croatian, French and Spanish.
Clients are received by prior arrangement, on Wednesdays from 8 AM to 1 PM and 3 to 6 PM, or as agreed.